Southern Cross Hemp Oil CEO Langdon Brown, who played an instrumental role over the last decade in bringing about the legalization of medicinal cannabis in Australia, and who has since become one of the country’s leading advocates for industrial uses of hemp, has secured $50 million in financial backing to build Australia’s first manufacturing plant for processing hemp fibre.

Mr. Brown hopes to make Australia a leading producer of feedstock for hemp-based products, including hemp-based plastic beads that hold the potential to revolutionize food packaging by providing a biodegradable alternative to traditional non-biodegradable plastic.

Mr. Brown told Australian media that he is looking to purchase up to 100 acres of land for the maufacturing plant in Murwillumbah, that would also include a tourism facility where the public could be educated about hemp’s many commercial and industrial uses.

All Charges Against Medicinal Cannabis Pioneer Dismissed By Sydney Magistrate

On 15th November 2018, Langdon Brown of Don Medicinal Cannabis had two commercial supply charges of cannabis oil dismissed in Sydney Downing Center. This is the second time such charges against Mr. Brown have been dismissed. 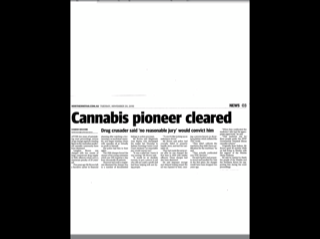 Langdon Brown, who is facing a trial next month for supplying medicinal cannabis  to sick and dying Australians, has been nominated for the 2018 Australian of the Year Award. 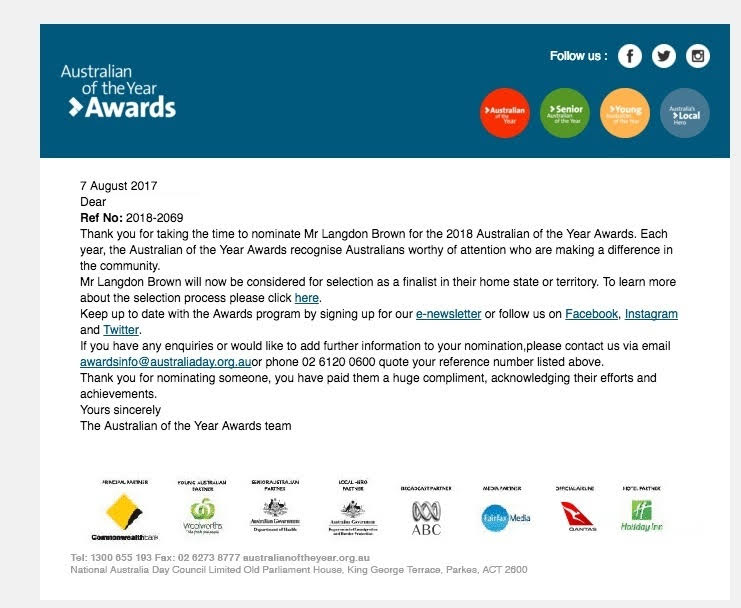 Langdon Brown, a major figure in the Australian medicinal cannabis industry, published a scolding Facebook post on April 18th accusing the New South Wales government in Australia of having two standards of justice in their treatment of medicinal cannabis. 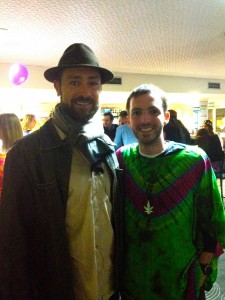 Langdon Brown meeting Dan Haslam, whose parents began fighting for legalization of medicinal cannabis after he began using cannabis to treat the symptoms of his cancer treatment (Facebook)

Brown concluded his post by calling for the NSW state government to drop its charges against him, and live up to its mandate to provide equal justice for all:

“To those in the NSW government, please call off this abhorrent witch hunt against me by the Crown prosecution. Please drop the criminal charges against me, that threaten to take me away from my family for violating a law that the entire country, from Victoria, to the federal government, to our own state, has already repealed, or is in the process of repealing.

To date, I have currently assisted 1,532 Australians with cancer, epilepsy, MS and other life threatening conditions with medicinal cannabis.”

News Corp published an apology to Langdon Brown this week for having published an article in the Sunday Telegraph and the Daily Telegraph alleging that Mr. Brown’s company, the Don Medicinal Cannabis, had “ripped off” sick patients in Australia.

In the apology, News Corp stated that the allegations made in the article about Langdon Brown and his business “were false”, and “apologise[d] unreservedly for the hurt and upset that has been caused to him by its publication”.

The articles will remain online for 30 days. 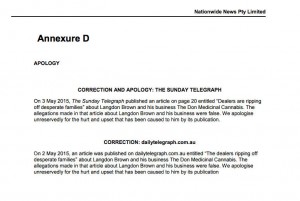 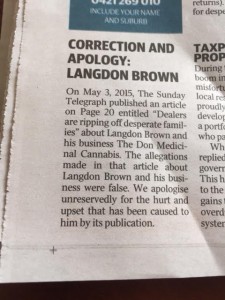